This is back when I was an anti (way before I joined KoC).
Killed Zeke’s murderer and got a lot of cash for it. No hard feelings Zeke? 🙂 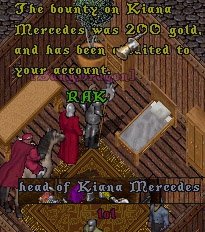 Two murderers from Chesapeake. They were living right next to my large forge and after the 4 or 5 of them tryed ganking me, I made some come out of the group and killed them. 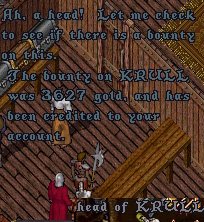 That guy was hanging with DR Feelgood. They were using UOE to see hidden peeps. I got help from a guy there and killed that KRULL, getting both his bounty and his prepatch heavy crossbow of power. Damn that was so nice :p 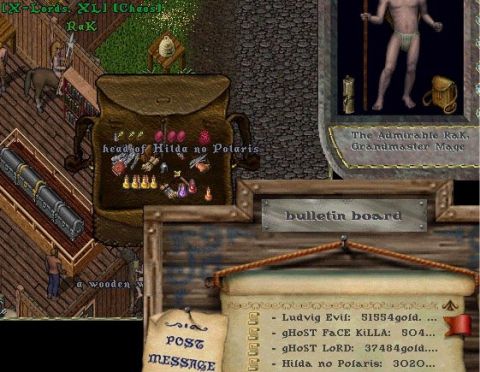 That was a blue PK named Hilda no Polaris. I killed him a first time with a bunch of dragons I had stabbled in Skara heh. Unfortunatly his head didn’t work so I had to kill him another time and page a GM to have his head cashed in. 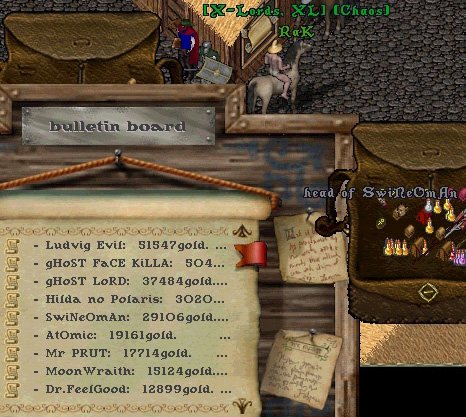 This is quite fun. That guy hated me since him and his gangbanging friends would die a lot to me eventhough they had huge numbers… One day he went murderer with his main and was pking in duo with another loser named XlordX.

Anyways both of them gank me at shame, playing on T1 with 30ms connects and I still manage to kill swineoman and make the other one recall with 5 or 10 hps heh.

Now the funny part is that it didn’t stop here. Several month later, when the guy had worked his char back and was back to blue status, both him and XlordX attacked me on their mains. A friend of mine came to help me and at the end of the fight XlordX recalled and his friend died. But instead of going to the healer he pressed res with penalty by mistake ROFL that was just hillarious.

Heh I was pking with Pyros when we met another group of PKers. One recalled the other died but his bounty really sucked 🙁 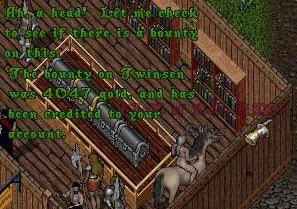 Another group of pks trying to gank me. Unfortunatly for them they either died / recalled.

Talk about some freaking newbie recalling in town as a murderer 🙂